Latvian large grey peas are mandatory for the Christmas table 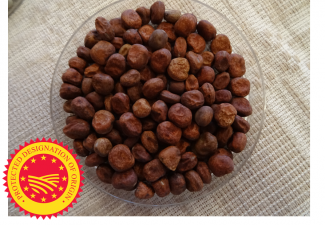 Latvian large grey peas have been enlisted in the European Protected Designations of Origin (PDO) list since 2015.
The tradition of cultivating grey peas in Latvia dates back to at least the 18th century. Nowadays grey peas with bacon are referred to as a very classical dish of Latvian cuisine, during the cold season and are almost mandatory for the Christmas table.

AREI is the only place in the world where grey peas have been bred for human consumption. Variety ‘Retrija’ with extra-large seeds (1000 seed weight is 360–380 g) had been created by the breeders of Priekuli Research centre of AREI.

More information about large Latvian grey peas as a product of the European Protected Designation of Origin http://eur-lex.europa.eu/legal-content/EN/TXT/PDF/?uri=CELEX:52015XC0606(02)&from=FR